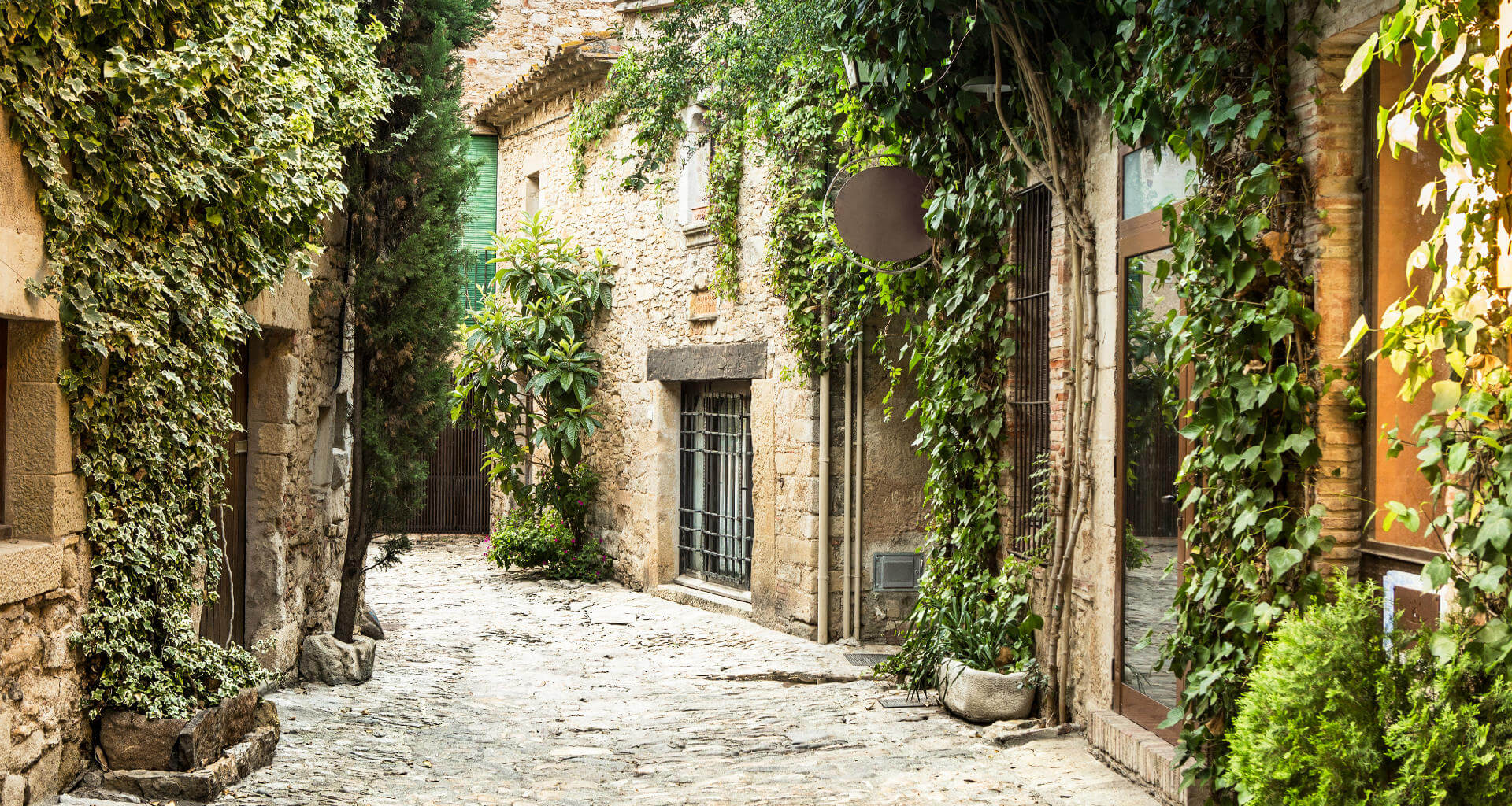 A private tour to discover the hidden beauty of the Costa Brava with a walk through its walled villages and remains of medieval castles.

The tour will start from the reception of your hotel with the meeting of your official guide and private driver who will accompany you during the wole day.

The main attraction of this tour is the journey through three wonderful villages of the Costa Brava area. They are charming places that venerate tradition, a taste for the homely and the natural passage of time. The main features of these villages include respect for the environment and the promotion of natural foods and artisan products. From the list of Pueblos con Encanto (charming villages), we highlight some particularities that have made them worthy of this mark and are a must-see.

A few kilometres from the Mediterranean Sea, on the Costa Brava, are the medieval streets of Pals. A beautiful old quarter that has been declared a Historic-Artistic Site. In the Gothic quarter of Pals, its beautiful cobbled streets flanked by aristocratic houses await you. The church of Sant Pere, built in 944, the castle, the medieval wall, Ca la Pruna, the Josep Pla viewpoint, the Torre de les Hores or the Plaça Major are some of the points of interest in the old town. The beach of Pals completes the visit to the walled town. At any of these points you can sample the local gastronomy, based on both sea and mountain products.

We continue our journey, very close, where we will find fairy-tale houses sculpted in stone, elegant restaurants, old-fashioned squares and impressive medieval remains that make of a jewel of Catalonia located in the Baix Empordà region.

Apparently, it is a small and isolated village that complements the list of historical-artistic monuments since 1975, year in which it was declared “Historical-Artistic Monument. Surrounded by a moat and walls, its main attractions include the ancient Plaza de les Voltes, the 13th century Romanesque church, the town walls and the charming buildings and towers that once formed part of the castle that gave the town its name. The town also stands out for being one of the best fortified Catalan towns. The town is one of the most important nuclei in terms of medieval architecture. It is extraordinarily attractive and beautiful, preserving its old feudal appearance, with narrow cobbled streets.

A group of whitewashed houses. It is a fishing village located along a rocky coastline. Calella de Palafrugell has preserved its authentic charm. Its architecture is an impressive mixture of old fishermen’s houses and elegant villas that combine dazzling white décor with delicate pastel tones. The old town centre is made up of narrow streets, houses with sloping tiled roofs and old fishermen’s cottages. The town’s irresistible charm is also enhanced by the great contribution of the surrounding area, which is home to magnificent natural parks, idyllic sandy coves and some of the most fascinating botanical gardens in the Mediterranean, such as the Cap Roig Gardens.

At the end of the tour, we will return to your hotel.

You can find out more about which cookies we are using or switch them off in settings.

This website uses cookies so that we can provide you with the best user experience possible. Cookie information is stored in your browser and performs functions such as recognising you when you return to our website and helping our team to understand which sections of the website you find most interesting and useful.

Strictly Necessary Cookie should be enabled at all times so that we can save your preferences for cookie settings.

If you disable this cookie, we will not be able to save your preferences. This means that every time you visit this website you will need to enable or disable cookies again.

This website uses Google Analytics to collect anonymous information such as the number of visitors to the site, and the most popular pages.

Please enable Strictly Necessary Cookies first so that we can save your preferences!